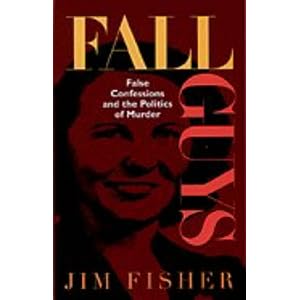 One of Jim Fisher’s books on exonerating two youth who were framed for murder. (Available at Amazon.com)

Here is the second part of the interview we conducted with retired FBI Agent and private investigator, criminal justice professor and true crime author Jim Fisher. (You can read part 1 of the interview here).

JF: To be a well rounded criminal investigator, you have to have knowledge of forensic science, law and basic investigative techniques. In other words, a lot of people might naively think, I’ll be a cop and drive around in a patrol car for five years and then I’ll become an investigator. Or patrols officers who were in the force for 25 years, and when they retire if they decide to get a license to be a private investigator, it hits them – they don’t know anything about criminal investigation. The creator of Sherlock Holmes (the fictitious detective) was author Arthur Conan Doyle. Doyle was a physician and he based the character of Sherlock Holmes on his anatomy professor, Dr. Joseph Bell. Dr. Bell told his medical students that they were detectives – the symptoms of illnesses were their clues and from those clues they had to deduce the correct solutions. Dr. Bell said to be a good physician or a good detective, his students had to have powers of observation, powers of deduction and the powers of imagination. These are the basic qualities of a master detective or of a good physician.

CJSI: Give us an example of one aspect of criminal investigations that you taught your university students at Edinboro.

JF: I would teach students how to conduct an interview. An interrogation is different than an interview. An interview is questioning someone who is cooperating with you. An interrogation is trying to get someone to confess. So there are techniques that interrogators use to encourage people (without coercion) to admit their crimes. For example, sympathizing with them, minimizing the crime, allowing them to blame others, giving them a more acceptable motive for the crime than what the real motive is…

CJSI: How did you learn criminal investigative skills?

JF: I’m still learning. It’s a lifelong pursuit. They taught us at the FBI Academy and then it’s been reading books and on-the-job training. When you go to a training academy or college, this is just giving you the foundation. The rest of it is up to you. People who succeed and are good at what they do are self taught. They know how to take their experience and convert it into knowledge and to learn from their mistakes. Also, it really helps, if you want to be an excellent investigator, to have, somewhere along the line, a mentor (some experienced investigator that will take you under his/her wing). In the FBI you go through a yearlong mentoring process. I happened to get hooked up with a really brilliant investigator and he taught me a lot of his tricks. I could see how he got information out of reluctant people or how he could go through a bunch of directories and records and find a fugitive without leaving the building. So it’s a combination of formal education (liberal arts and vocational), good mentoring and self-study (which involves experience and continued book learning).

CJSI: How did you get into writing?

JF: As a criminal investigator, you write up a lot of reports – third person narrations from people that have given you information. That’s basically how I learned to write. When I was in the FBI, they said, “You write these wonderful interviews. You ought to be a writer!” So rather than go through an apprenticeship as a newspaper writer, my apprenticeship in writing was as an FBI Agent.

CJSI: Tell us about one of your books based on investigations you conducted.

JF: I wrote a book about two cold case murders in the Pittsburgh area that took place in the 1950s where two very young boys (8 and 13 years old) were accused of murdering women. One of the boys went away for 10 years. The other boy was so young and they had him so convinced that he confessed to murdering his mother with a hatchet. In 1991, I reinvestigated these crimes. I indentified the real murderers. We were able to get a governor’s pardon for the boy who went to prison. And the boy who was told he had murdered his mother, he got to find out that he hadn’t murdered her and I told him who did. So that became the book Fall Guys: False Confessions and the Politics of Murder. Two different men committed the murders but there is a commonality because the same detective framed both boys and I proved it was a frame-up.

CJSI: Do you have any advice for those thinking of pursuing a criminal justice career?

JF: I once asked a high school career counselor, “How can I go and get a good paying job?” I was in high school so was just thinking about wanting my own car and that sort of thing. He said, “Find out what you like and what you want to do, become good at it and I don’t care what it is, you’ll make money and a lot of it.” It was good advice. Sometimes it takes a while. You may go down a couple of different roads and take some bad turns. It doesn’t necessarily happen when you get out of college even. That’s why many kids when they start college they may change their major twice or three times and come out and may never get into the field that they majored in. We all take those windy roads, there’s no straight path or formula. The only guiding principle in my point of view is what do you like to do and what kind of environment do you want to work in? Do you want to work inside or outside, in a big city or small town or be out and about? You might say you want to be a forensic scientist but find out you don’t like working in a crime lab all day.

Criminal Justice School Info would like to say many thanks to Jim Fisher for sharing his experiences and knowledge. Visit his true crime blog which he updates regularly and his bibliography page to find out about the intriguing investigative books he has written.